Getting Burned By Acid Rain 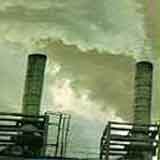 If we measure the pH of distilled water, we will find that it is most often in the middle of the pH scale (7) - not too acidic, not too basic. Rainwater, without a lot of outside contaminants, tends to be a bit more acidic, between 5 and 6 on the pH scale, because it interacts with the carbon dioxide in the atmosphere. But the average rainfall in the Eastern United States is even more acidic, with a pH of about 4.3. Why is that?

Pollutants in the air, primarily sulfur dioxide and nitrogen oxides, acidic compounds that are a byproduct of electrical power generation that uses fossil fuels, smog from large cities with large populations, and urban vehicular traffic, mix easily with moisture in the atmosphere. This atmospheric soup is further affected by radiation from the sun, which speeds up chemical reactions. The resultant rainfall is acidic enough to cause a host of environmental effects on trees and plants, man-made structures, buildings and auto finishes, and to fish and other fresh-water animal life.

Even in winter, when the precipitation is more often snow, there is acid snow. Areas far from the source of the acid rain share the problem as winds move the rain hundreds of miles. The bottom line is that acid rain affects the environment where plants and animals live in a delicate balance and acid rain speeds up the process of erosion not only of natural objects but also of historic objects of art, science and history.