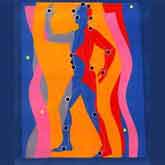 Traditional Chinese medicine theorizes that there are more than 2,000 acupuncture points on the human body, and that these connect with 12 main and 8 secondary pathways called meridians. Chinese medicine practitioners believe these meridians conduct energy, or qi (pronounced

Western scientists have found meridians hard to identify because meridians do not directly correspond to nerve or blood circulation pathways. Some researchers believe that meridians are located throughout the body's connective tissue; others do not believe that qi exists at all. Such differences of opinion have made acupuncture an area of scientific controversy. Several processes have been proposed to explain acupuncture's effects, primarily those on pain. Acupuncture points are believed to stimulate the central nervous system (the brain and spinal cord) to release chemicals into the muscles, spinal cord, and brain. These chemicals either change the experience of pain or release other chemicals, such as hormones, that influence the body's self-regulating systems. The biochemical changes may stimulate the body's natural healing abilities and promote physical and emotional well-being. There are three main mechanisms:

1. Western scientists have found evidence that acupuncture points are strategic conductors of electromagnetic signals. Stimulating points along these pathways through acupuncture enables electromagnetic signals to be relayed at a greater rate than under normal conditions. These signals may start the flow of pain-killing biochemicals, such as endorphins, and of immune system cells to specific sites in the body that are injured or vulnerable to disease. 2. Research has found that several types of opioids may be released into the central nervous system during acupuncture treatment, thereby reducing pain. 3. Studies have shown that acupuncture may alter brain chemistry by changing the release of neurotransmitters and neurohormones. Acupuncture also has been documented to affect the parts of the central nervous system related to sensation and involuntary body functions, such as immune reactions and processes whereby a person's blood pressure, blood flow, and body temperature are regulated.