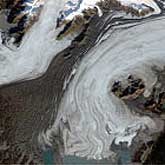 Could an extra warm summer cause an earthquake in your backyard? Probably not... unless you live in Alaska. You probably know that friction in the earth's crust causes earthquakes, but did you know that a little extra sunshine might increase your chances of experiencing an earthquake if you live where glaciers are present? That's because as glaciers melt, they retreat and lighten the load on massive rocky slabs of Earth's crust called tectonic plates. This frees the plates up to move against each other and cause the friction needed to make earthquakes. Scientists at NASA and United States Geological Survey (USGS) are using NASA satellite and global positioning system receivers, as well as computer models, to study movements of Earth's plates and shrinking glaciers in southern Alaska. Glaciers here are very sensitive to climate change. Higher temperatures and changes in precipitation over the last 100 years appear to be contributing to an increase in glacier melting in the area.

Southern Alaska is also prone to earthquakes because a tectonic plate under the Pacific Ocean is pushing into the coast, building up lots of pressure. The weight of a big glacier on top of these earthquake active areas can help keep things stable. But, as the glaciers melt and their load on the plate lessens, there is a greater likelihood of an earthquake happening to relieve the large strain underneath. Even though shrinking glaciers make it easier for earthquakes to occur, the forcing together of tectonic plates is the main reason behind major earthquakes. Scientists believe that a 1979 earthquake in southern Alaska, called the St. Elias earthquake, was promoted by rapidly melting glaciers in the area. The earthquake had a magnitude of 7.2 on the Richter Scale. Pressure from colliding tectonic plates had been building since 1899 when the last big earthquake had occurred in this area.

Between 1899 and 1979, many glaciers in this region thinned by hundreds of meters and some completely disappeared. To study the link between melting glaciers and the St. Elias earthquake, scientists used aerial and ground photography along with satellite and ground measurements to estimate how much ice was lost. Then they calculated how much instability the loss may have caused in the Earth?s crust. They found the loss of ice would have been enough to encourage the 1979 St. Elias earthquake. Using what they know about the St. Elias earthquake, scientists are continuing to look at Alaska's glaciers with new satellite technology to get a better grasp on the relationship between rapidly melting glaciers and the likelihood of earthquakes.