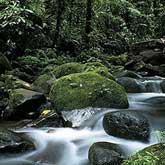 June through September is the dry season for the Amazon Basin of South America. Yet the basin's dry season may be getting uncharacteristically wetter, according to NASA's Goddard Space Flight Center in Maryland. That's news that could affect all of us, no matter where we live. You might say as the Amazon's weather goes, so goes the world's climate. That's because in many ways, tropical areas like the Amazon literally drive weather systems around our globe. Because of the concentration of sun's rays near the equator and the plentiful ocean moisture, the tropics receive over two thirds of the world's rainfall. When it rains, water changes from liquid to vapor and back again, storing and releasing heat energy in the process. With so much rainfall in the tropics, that means an incredible amount of heat is released into the atmosphere. In fact, so much heat is released that the tropics are our planet's primary source of heat redistribution.

One way to think of the tropics is like the human heart: Just as the heart pumps blood to the body to keep organs and tissues alive, the tropics circulate heat, triggering changes in weather and nourishing climates around the world. Because of the basin's location in the tropics, any sort of weather hiccup from the area could signal serious changes for the rest of the world like droughts and severe storms. According to researchers at Goddard, such changes may indeed be on the horizon. Using data from NASA's Tropical Rainfall Measuring Mission and military and NOAA satellites, Goddard meteorologists examined a large, deforested area in the Amazon Basin. The meteorologists wanted to know if the lack of tree cover is affecting the weather around the area. Initial indications show that it is. 'In deforested areas, the land heats up faster and reaches a higher temperature... that enhance the formation of clouds and ultimately produce more rainfall,' said meteorologist Andrew Negri.

The researchers were quick to caution that the change in rainfall was most apparent in August, when the Amazon changes from dry to wet seasons. During that time, weather can be unpredictable, making it difficult to determine what conditions are normal. Negri also pointed out that more research needs to be conducted in order to tell what's really going on. 'The effects here are rather subtle and appear to be limited to the dry season. The overall effect of this deforestation on annual and daily rainfall cycles is probably small and requires more study,' Negri said. In any case, the changes in the Amazon Basin's weather have caught the eyes of scientists. NASA researchers and others hope to develop new computer models to better answer the mystery of the unseasonable rain.