The Ants Go Marching One by One, Hurrah! 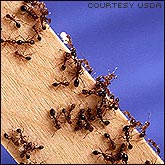 Have you ever wondered how ants know the way from one place to another? Even when you remove them all, they are right back to the trail they were on before as if there were an invisible road telling them where to go! How do they do that? Well, actually, there are invisible roads telling them where to go, and they are called pheromone trails. Pheromones are chemicals emitted by living organisms to communicate with other organisms of the same species.

Each nest of ants has its own smell produced by pheromones so the members can recognize each other. Pheromones also communicate chores that need to be done, excitement, danger, and are used to attract mates. Ants will drop a pheromone trail to a food source that the other ants can smell. The pheromones evaporate quickly, so when the food source starts to run low, less pheromones are left on the trail, and eventually the trail disappears and so do the ants. Each ant does not have a specific job, but rather does a specific job depending on the pheromone trail that is smelled. Scouts, or ants that find food, wander randomly until a food source is located, dropping pheromones so they know their way back. When the ants follow the scouts' trail, the meandering pattern is straightened by the random footsteps of each ant with time, and a fairly straight path is eventually formed.

So, ants do have roads to follow, and a task defined for them according to the pheromone trail they are following. The only way to stop the ants in their tracks is to erase the pheromone trail, but given enough time, they will remake their trail and be back again as long as there is a food source.