The Truth About Atomic And Hydrogen Bombs 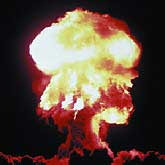 In the 1930's Enrico Fermi and other scientists studying the properties of radioactive materials observed an interesting phenomenon. They found that the readings taken with a Geiger counter were lower when taken through water than when taken through air. It wasn't immediately obvious what this meant, but soon they realized that the medium of water moderated the radioactive decay process by slowing down the subatomic particles emitted by the radioactive material. This observation eventually allowed the construction of the first 'atomic pile', in which a chain reaction of decaying radioactive nuclei could be maintained in a controlled manner. In a nuclear chain reaction, a particle emitted from one atomic nucleus strikes other nuclei, causing them to split apart and emit particles that in their turn strike other nuclei, and so on in a continuing process.

Without the intervention of a moderating medium, the process can go on in an uncontrolled manner. Each instance of a nucleus splitting apart and emitting a particle releases a certain amount of energy. When the amount of material present is more than a certain threshold quantity, or 'critical mass', so many particles and so much energy are released that the chain reaction runs wild. This is the process of 'nuclear fission' that defines an atomic bomb. The same process, but using a good moderating medium, allows the controlled release and capture of the same energy, which is the basis of the nuclear power generating station. The incident at Chernobyl some years ago stands as a grim reminder of the close kinship between the destructive force of the atomic bomb and the constructive generation of electricity in the nuclear reactor.

In 1953, people watched the testing of the first hydrogen bomb with some fear. For the first time in history, a force was to be purposely unleashed over which man had no control whatsoever and that served no purpose other than destruction. There was a fear that the detonation of that first bomb would also initiate the destruction of the world. This fear was based on the exceedingly small but finite probability that the explosion of this bomb would initiate an unstoppable chain reaction in the most common element in the world: hydrogen. Their fears were perhaps not totally unfounded, as a rumor persists that the energy liberated by that bomb exceeded the very best theoretical calculations by as much as twenty percent, begging the question 'where did it come from?'. And yet, this amazingly destructive force also presents a source of hope for mankind. Research continues to look for a way to harness the incredible power produced by the nuclear fusion process. Success would mean abundant cheap energy for the whole world to use.