What Are The Key Ingredients For An Avalanche? 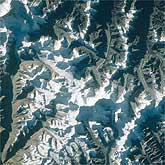 All that is necessary for an avalanche is a mass of snow and a slope for it to slide down. For example, have you ever noticed the snowpack on a car windshield after a snowfall? While the temperature is cold, the snow sticks to the surface and doesn't slide off. After temperatures warm up a little, however, the snow will 'sluff,' or slide, down the front of the windshield, often in small slabs. This is an avalanche on a miniature scale. Of course, mountain avalanches are much larger and the conditions that cause them are more complex. A large avalanche in North America might release 300,000 cubic yards of snow. That's the equivalent of 20 football fields filled 10 feet deep with snow. However, such large avalanches are often naturally released. Skiers and recreationists are usually caught in smaller, but often more deadly avalanches.

Slab avalanches are the most common and most deadly avalanches, where layers of a snowpack fail and slide down the slope. Since 1950, 235 people in the U.S. have been killed in slab avalanches. Hard slab avalanches involve large blocks of snow and debris sliding down a slope. In soft slab avalanches, the snow breaks up in smaller blocks as it falls. An avalanche has three main parts. The starting zone is the most volatile area of a slope, where unstable snow can fracture from the surrounding snowcover and begin to slide. Typical starting zones are higher up on slopes, including the areas beneath cornices and 'bowls' on mountainsides. However, given the right conditions, snow can fracture at any point on the slope.

The avalanche track is the path or channel that an avalanche follows as it goes downhill. When crossing terrain, be aware of any slopes that look like avalanche 'chutes.' Large vertical swaths of trees missing from a slope or chute-like clearings are often signs that large avalanches run frequently there, creating their own tracks. There may also be a large pile-up of snow and debris at the bottom of the slope, indicating that avalanches have run. The runout zone is where the snow and debris finally come to a stop. Similarly, this is also the location of the deposition zone, where the snow and debris pile the highest. Although underlying terrain variations, such as gullies or small boulders, can create conditions that will bury a person further up the slope during an avalanche, the deposition zone is where a victim will most likely be buried.

The National Snow and Ice Data Center is a United States information and referral center in support of polar and cryospheric research.