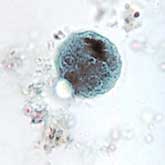 Bacteria sometimes catch a virus. Bacteriophages--'bacteria-eaters'-- or phages, are viruses that use bacteria to multiply. The phage attaches to a bacterium, injects its own genetic material, either RNA or DNA, through the bacterium's cell wall and membrane and takes over the cellular machinery to create hundreds of bacteriophages. Eventually, there are so many copies of the phages that the bacterium explodes, and the newly formed phages take over other bacteria. Each strain of bacteria has unique phage predators.

However, bacteriophages are not harmful for humans. Instead, these viruses are beneficial to public health.

In the 1990s, bacteriophage research became an alternative for scientists worried about antibiotic resistance. Researchers in America followed the example of scientists in Western Europe who were treating patients with bacteriophages and obtaining great results. When antibiotics don't work for a bacterial infection, doctors can use bacteriophages to kill the bacteria. Although ironic, a virus can make us feel better!