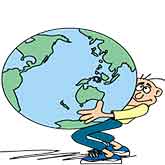 Around the 20th to 22nd of March, the Sun will have reached an astronomical location that is used to mark the change of seasons. This location, within the constellation of Pisces the Fishes, is 0 degrees and 0 hours, and is a coordinate position that looks like the latitude and longitude values we assign to geographical locations on the surface of the Earth. The 0 degrees, like latitude, indicates that the Sun is on the Equator, and the 0 hours, like longitude, is the starting point for coordinate positions of celestial objects eastward of the 0 hour, somewhat akin to the Prime Meridian. This day, sometimes referred to as an equinox (meaning equal night), is a day when the Sun is over the equator and for most of the Earth will rise due east and set due west. This gives us an equal amount of daylight and night hours.

While the changing of seasons may not make much news it is not unusual to hear or read about attempts to balance an egg on this particular day. There is a long-standing notion that when the Sun is over the equator, its gravitational pull on the Earth is such that an egg will balance if placed on one of its ends. Even though this goes against common sense thinking, it is nevertheless an opportunity to explore one of the best examples of what should be called bad science. Actually for that matter this is also a good example of bad news reporting, as the emphasis seems be on showing attempts to balance an egg only on the equinox. Will an egg truly balance only on the equinox day or will it balance on any day during the year - or not? And why just an egg? Shouldn't other objects balance as well, or is gravity selective?

So get your eggs out and try this balancing act, or why not just cook the egg, drink some juice and have a balanced meal!