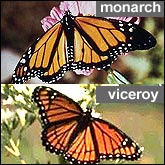 What is extraordinary is that some species have apparently evolved to resemble the dangerous and poisonous ones even though they are not. The classic example would be the perfectly harmless Viceroy butterfly which, as seen in the image, closely resembles the poisonous Monarch butterfly. Monarch butterflies are almost completely free from attacks by birds, presumably because of their bad flavor attributed to the fact that its larvae feed exclusively on milkweeds. Viceroy butterflies on the other hand are a completely different family of butterflies whose larva feed on the leaves of cottonwood and willow trees, and who are perfectly tasty. Most birds however avoid eating Viceroys just because of its similar looks to the Monarchs.

This is just one of the examples of a so called Batesian Mimicry which was proposed in 1862 by the British naturalist Henry Walter Bates. Other examples are some families of snakes, insects resembling wasps, poisonous spiders, etc. It seems that sometimes just resembling like another dangerous species gives one an evolutionary advantage.