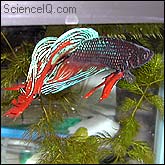 The Betta fish is possibly the most handsome tropical fish out there. We say handsome because the male of the species is the bigger and more exotic one. Referred to as the jewel of the Orient, Betta are most abundant in the shallow rice paddies of Thailand.

Male Betta have long, velvety and colorful fins, and a biting and fighting personality. They are very territorial and two male Betta in the same small area will fight each other, sometimes to death-hence their nickname, 'Siamese fighting fish'. The Betta was first described in 1846 by Valenciennes and Cuvier. The first shipment of Betta arrived in the United States in 1909 and was called Betta splendens.

Betta is classified as a fresh water fish, however in addition to standard gills that are used to extract oxygen from the water, they have a specialized labyrinth organ that allows them to breathe atmospheric air through their mouths. Betta have quite a charming personality when interacting with humans and are one of the only fish which like to be petted!