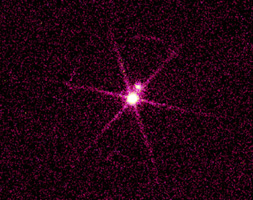 Stars, like people, are seldom found in isolation. More than 80% of all stars are members of multiple star systems containing two or more stars. Exactly how these systems are formed is not well understood. Some are thought to form when a collapsing cloud of gas breaks apart into two or more clouds which then become stars, or when one star captures another as a result of a grazing collision, or by a close encounter with two or more other stars. The most common multiple star systems are those with two stars. These so-called binary stars have played an important role in many areas of astronomy, especially X-ray astronomy.

In many binary systems the stars orbit their common center of mass under the influence of their mutual gravitational force, but they evolve independently. These are called wide binaries, and are analogous to friends that are far apart and stay in touch with an occasional telephone call or e-mail on holidays. The hot upper atmospheres, or coronas, of these stars can produce X-rays, but not nearly so spectacularly as the X-ray binaries discussed below and elsewhere. Wide binaries are nevertheless important because they provide the best means for measuring the masses of stars by observing the size and period of the orbit and then applying the theory of gravity.

In some binary systems, called close binaries, the stars are so close together that they can transfer matter to each other and change the way the stars look and evolve. They are like very close friends or family members who strongly affect each other's lives.