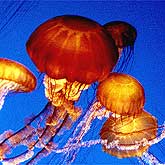 Not all animals glide or fly in the air. Many marine animals are masters of 'flight' and speed under the water. The ocean environment brings its own set of adaptations and specializations for the animals that move through it. One type of locomotion in the water is jet propulsion. The simplest example of this can be seen in jellyfish. These animals fill their umbrella section with water and then push the water out, sending the jellyfish in the opposite direction. This type of movement does not allow much control over direction. Salps are another simple animal that use jet propulsion to move. These animals are related to sea squirts and live in large chains, some as long as 100 feet. Each individual salp has two siphons (a tube for moving water), one for taking water in and one for expelling water. They have bands of muscles easily seen in their transparent bodies that contract and expand, forcing water in and out of the siphons. This propels the animal forward, but still with no control.

A more complex animal using jet propulsion is the squid. Some squid are able to reach speeds high enough to shoot them out of the water and onto the decks of passing ships! The squid has a muscular mantle (outer covering) which, when expanded, fills with water. When these muscles contract, water is expelled through a single siphon and the squid is propelled in the opposite direction. The squid can control its direction by rotating (moving) the siphon. Often the expulsion of water is accompanied by a puff of dark ink from the squid's ink sac in order to deter predators from following.