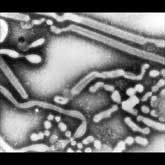 Influenza, unlike many viruses that make humans sick, can also affect birds and pigs. Generally strains of the influenza virus that causes disease in people are slightly different from those that affect birds and pigs. People and pigs can catch flu from each other, and birds and pigs can catch it from each other, but until 1997 people didn't catch it from birds. In that year there was an outbreak of bird flu in Hong Kong, and it seemed that people were catching it from chickens. (All the chickens in Hong Kong were slaughtered, and the outbreak ended.)

This ability of the influenza virus to infect animals as well as people is one reason we will never be able to completely eradicate it, as we have done with smallpox. Thanks to a worldwide vaccination program, smallpox is extinct in nature, and only exists in a few well-guarded laboratories. This was possible in part because smallpox has no hosts other than people. Flu, on the other hand, can hide out in various birds or in pigs, and return years later to start another epidemic.

While the virus is hiding out in birds, it can also mutate so that our immune system, and last year's flu vaccine, won't recognize it. That's why you need a new flu shot every year - you will be facing a new and slightly different flu virus every year. So far all the victims this year have caught the Bird Flu from birds, not from other people. This is important, because to start an epidemic the virus must be contagious from person to person, and so far this one isn't.