Butterflies In Your Brain 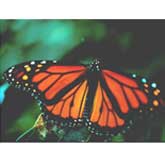 The idea behind chaos theory is that complex systems have an inherent element of unpredictability. The human brain certainly qualifies as a complex system. It is also a chaotic system. It does not behave in completely predictable ways, partly because it is always restructuring itself in response to environmental input. It is a constantly moving target, not unlike the elusive electron of an atom: While one may say with a certain degree of probability where it (brain or electron) might be at a certain time, absolute certainty is impossible. The uncertainty is self-compounding because one is attempting to make predictions about the future state of something whose present state is partly unknowable.

That quality of open-ended plasticity is often said to be one of the human brain's greatest assets, allowing it - and us - to adapt to unlimited environmental challenges. The interactions between neural biology and environment are astoundingly complex and subtle. The brain offers a wealth of examples of what MIT meteorologist Edward Lorenz called the butterfly effect: Just as the insignificant turbulence caused by a butterfly's wing can set in motion a chain of events leading ultimately to a hurricane, a seemingly trivial event early in a brain's development may have long-lasting consequences that may be impossible to predict. But experiments with other animals have revealed some patterns in the complexity. If a young mammal is deprived of its mother's nurture, it will be at high risk of having social problems and anxiety disorders as an adult. On the other hand, the offspring of highly nurturing mothers appear to be genetically protected from the harmful effects of bad early rearing.

But then again, if embryos of genetically high-risk mice are transplanted into the wombs of highly nurturing mothers and then raised by those nurturing mothers, they do not merely grow up to be low in anxiety. They also go on to have offspring that are in turn protected from the harmful effects of maternal deprivation. In a mouse, the right environment in the womb and shortly after birth is sufficient to break the cycle of anxiety disorders. With humans as with mice, the most powerful effects of some genes exert themselves very early in life. A given version of a gene may collude with a given environment to start the brain along a path of development. Even if you were to somehow replace that gene later in the life of the individual, it wouldn't make a difference. The basic structure of the brain will already have been nudged in a certain direction, a fact that can no more be changed than the butterfly can undo the turbulence caused by a flap of his wing the week before.