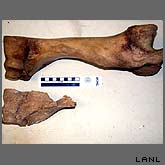 Determining the age of relatively recent fossils, those of plants and animals that lived tens of thousands of years ago, is not a guessing game but an exact science. By using carbon dating we can determine their age to within few years. Carbon dating is a technique where by measuring the residual carbon-14 concentration of the fossil and comparing it to that from samples that recently died, one can accurately estimate the date when the plant or animal in question died.

Naturally, carbon occurs in three isotopes or forms: C12, C13 and C14. The number after the letter 'C' denotes the different number of neutrons in the nucleus. The C12 and C13 are both stable and therefore useless in carbon dating. The C14 is unstable and undergoes radioactive decay with a half-life of about 5,568 years. If you leave 100 atoms of C14 on the shelf today, in about 5,568 years you will have 50 atoms of C14 left. The remaining 50 will have decayed into nitrogen plus some electrons as byproducts. After 11,136 years, you will have 25 atoms of C14 and 75 atoms of nitrogen and so on. The important question is: How do you know how many C14 atoms you started with? Also, how does this radioactive carbon get into living things?

It all starts high up in the skies. Nitrogen from the air is constantly bombarded by cosmic ray neutrons. Infrequently, one of these neutrons manages to penetrate deep into the nitrogen nucleus and converts it to carbon-14. This C14 then gets oxygenated into carbon-14-dioxide which plants absorb through photosynthesis and which gets into animals through the food-chain. The day the plant or animal dies, it stops absorbing C14. From then on, this fixed number of C14 atoms only gets depleted as the years go by. The number of these C14 atoms at the time of death is approximately constant for any given type of plant or animal regardless of whether it died today or 10,000 years ago. Almost all of the radioactive C14 gets depleted in about 60,000 years, so this technique becomes useless for older fossils.