How Do Cats See in the Dark? 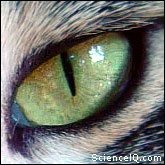 Two shutter-like ciliary muscles control their characteristic vertical pupils, opening them wide when light is scarce and closing them down to a tiny slit in bright conditions. Cats also have a reflective layer of cells behind the retina called the tapetum lucidum. This layer recycles any light not absorbed by the retina by reflecting it back for a second pass. The tapetum is responsible for the nighttime 'glowing eyes' effect because some of the ingoing light doesn’t get absorbed even after two passes through the retina.

As you might guess, when seen through a cat’s eyes the world would look different. Very bright light can cause humans to see circular halos. These bright lights would create a rectangular halo in a cat's eye. Their more strongly curved cornea allows them to see a more panoramic view, and the large rod to cone ratio means they see predominantly in black and white.