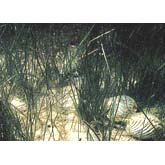 Native Caulerpa taxifolia is found in and around the waters of Florida and the Caribbean. It is a smallish, yet hardy saltwater plant that grows rapidly and is ideal for use in aquariums with diverse conditions. It does, though, require consistent light and warm temperatures to flourish. In other words, it occupies an ecological niche. The Stuttgart Aquarium in Germany tried to improve on Mother Nature and succeeded in developing a hardier variety. Apparently, they were pleased with the result. Their cloned version, however, little-resembled the native species. It was Caulerpa-on-steroids, fast growing and even hardier, comfortable both in warm and cold water, and in low-light environments. Rather than the diminutive native plant, this monster grew tall and strong. C. taxifolia proved so popular that it was soon found in public aquariums in France and Monaco. By 1984, it was a popular specimen in home aquariums. Better living through science.

Sometime around 1984, a small amount of our killer algae escaped from the Oceanographic Museum of Monaco into the Mediterranean Sea. Scientists estimated this original patch to be about a square yard. The patch liked its new home so much it grew and grew and grew. By 1989 it had blanketed over 2 square acres (.8 ha) of the sea floor. If this weren't bad enough, Caulerpa taxifolia was not a nice neighbor. It choked out native plants in its path, and altered fish populations as it rippled through the ecosystem. Fish that ate fish that ate plants, and so on. It impacted coastal towns, the fishing industry, tourism and much more. Talk about lack of diversity. Today, that little patch in the Mediterranean Sea covers over 14,000 acres (about 57 km) in a jungle of 10-foot (3 m) deep algae. It is clearly a man-made ecological disaster.