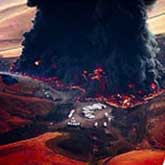 Chemical burns are the result of very normal reactions that can occur between the offending material and living tissue components. People generally tend to regard their bodies as things outside of the realm of chemistry, but nothing could be further from the truth. Our bodies are nothing more than a collection of chemical materials and systems - molecules, made of atoms - that are arranged in a certain way to carry out the 'life processes'. The atoms and molecules from which our physical bodies have been constructed can, and do, react quite normally when in contact with other atoms and molecules, according to the prevailing conditions. The vast majority of structural material in the human body is protein in nature: chains of 'amino acids' joined together by 'amide' bonds. These bonds are fairly readily destroyed by the process of 'hydrolysis'. The amide bond is split apart, and the components of a water molecule are added to the two ends forming a carboxylic acid end and an amine end.

Hydrolysis requires the presence of water, which coincidentally makes up a very large percentage of human body tissues, and is facilitated by the presence of either acids (sulfuric acid, phosphoric acid, hydrochloric acid, nitric acid, etc.) or bases (most notably, sodium hydroxide, or 'caustic soda'). When human tissue comes into contact with such materials, the process of hydrolysis begins immediately, breaking down the protein structure of the skin and whatever other tissue has been contacted. As long as these materials remain in contact with each other hydrolysis continues to occur, and eventually the tissues will be dissolved away and disappear. Need an example? Just think about what happens to the food you eat. Into your stomach it goes, where it is masticated and thoroughly mixed with stomach acid, a very strong solution of hydrochloric acid.

There is actually a very close relationship between these chemical processes and the cooking process. The surrounding conditions play a large part in cooking, as they do with all chemical reactions. Temperature is particularly important. Heating generally makes chemical reactions proceed at a faster rate. When foods are cooked, heat activates the proteins and other materials in them. It also activates the water that is present in the foods and which may have been added for cooking. In this hot environment hydrolysis takes place and the food materials are broken down. The length of time that the food is cooked determines the extent to which it is broken down; the difference between crunchy vegetables, and mush. Since it is only the action of heat and water that is bringing about the action of hydrolysis in the meat and other tissues, that list of materials capable of inflicting burn damage through chemical action thus has to include something as harmless as water! Surprised?