Why Can't We Really Clone Dinosaurs? 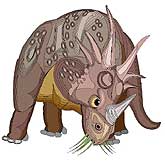 You might think, if you saw the movie Jurassic Park, or read the book, that a real live cloned dinosaur would be on the TV evening news any day now. Not very likely! In the fictional version, the dinosaur DNA is resurrected from the stomachs of prehistoric mosquitoes that had sucked some dinosaur blood just before being trapped and preserved in amber 80 million years ago. (Indeed, amber is a wonderful preservative, and just might preserve some DNA!) Then the DNA was transferred into crocodile eggs whose own DNA had been removed. Voila! Baby dinosaurs.

But to clone an animal, as Dolly the sheep was cloned a few years ago, you need not just DNA but whole nuclei - plus an unfertilized egg with its own nucleus removed, to transfer it into. That's why scientists call the cloning process 'nuclear transplantation.' The DNA in sheep or dinosaurs, or people or frogs or mice, or any other animal large enough to see, comes packaged in the nucleus with a lot of associated scaffolding and regulatory proteins to help it carry out the business of running a cell. Naked DNA can't do much by itself. And whole dinosaur nuclei aren't going to be found any time soon.

Some people who have given up on the possibility of cloning dinosaurs think mammoths would be a better bet. Several have been frozen (not fossilized) in the Arctic permafrost in Siberia, and they are only thousands of years old, not millions. Still, the chances of recovering intact nuclei from them is pretty slim. So don't be planning your trip to Jurassic Park, or Mammoth Park, this year.