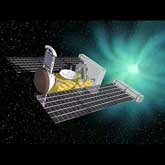 One of the most imaginative NASA missions of recent years is the Stardust mission. Its main purpose: to gather dust and particles from comet P/Wild 2 and return them to Earth for study. Think about that for a second. We build a spacecraft, send it out past the orbit of Mars, a round trip of over seven years, to rendezvous with a comet only 4 km across, that itself is moving. The spacecraft flies through the comet's tail and uses super gel to collect specks of dust millions of years old, and then it returns to Earth. Wow!

Stardust was launched on February 7, 1999 from Cape Canaveral. It will reach comet P/Wild 2 on January 2, 2004, 2.6 AU from the Earth, and fly as close to it as 93 miles (150 km) at about 4 miles per second (6 km/s) collecting samples. Its trip will end in January, 2006. Scientists are interested in comets because they formed at the same time as the solar system, and their makeup, despite numerous trips around the Sun, is still relatively unchanged from the time of their birth. It may tell scientists about the early universe.

The actual collecting will be done by a blue silica-based substance called aerogel. Aerogel, which means 'air gel', was chosen because it will have almost no interaction with the particles collected and is highly porous. The aerogel, which starts out in a gelatin form is dried onto a disc. The disc is then deployed to collect the samples. Particles are expected to be no larger than a micron in size. After all samples are gathered, the spacecraft will seal the Aerogel disc for its trip through Earth's atmosphere. Then eager scientists, after a six year wait, will have their hands on some comet dust.