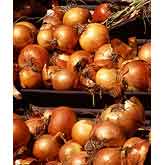 If you've ever spent any time in the kitchen, you know that slicing, chopping or dicing raw onions makes you cry. This vegetable has been doing this to humans for a long time. The onion is believed to have first been cultivated thousands of years ago in the Middle East with an even earlier root, (excuse the pun) in Asia. It is consumed raw, like an apple in many countries.

Onions belong to a group of plants called alliums, which also include leeks, garlic and chives. But it's the onion that wins the prize for shedding tears, and here's why. The cells of an onion contain sulphuric compounds and other enzymes. But as long as they are safely locked in the cells of the onion, there are no tears. When you cut through the cells of the onion, you release these volatile substances. They mix, forming sulfenic acids, which in turn become a gas. It is that gas that irritates your eyes.

There are two trains of thought as to what causes the irritation. Some believe that the gas mixes with the water in your eyes to form a mild sulphuric acid, and this acid causes the burning and watering. Others believe that the gas itself causes the nerve endings in your cornea to trigger a tearing response in your tear ducts. In either case, the tears wash the irritants away. Many food experts advise wearing goggles to prevent tearing, but that's a bit extreme. My best method - get a friend to do it.