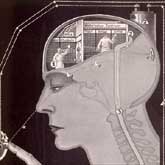 Dreams are a universal feature of the human mind. Carl Jung even believed that visions in our dreams offer glimpses into universal archetypes, instinctive primordial images deriving from a collective unconscious built into the very structure of the human brain. You might think, then, that even blind people could tap into this instinctive pool of primordial images and see them in their dreams. However, while people who are blind certainly do dream, their dreams are visual only to the extent that they can see, or could see before their blindness, in their waking life. People who are blind from birth have dreams that are primarily auditory, with their other intact senses participating to about the same degree that they do in a sighted person's dreams. They do not, however, dream in visual images. People who are legally blind but are able to, say, see blurs of movement, light, and color would have a visual dimension to their dreams matching what they see when they're awake.

There is no evidence that the unconscious (or subconscious) mind holds any sort of store of visual symbols independently of the brain's development of systems for interpreting visual input through visual stimulation from birth on. Without that kind of stimulation, the brain has no more ability to imagine images than the blind person would have to see images while awake.

In An Anthropologist on Mars, Oliver Sacks tells the remarkable story of a 50-year-old man who, after being blind since shortly after birth, has his eyesight restored by a cataract operation. When the bandages are removed, the man sees something, but he doesn't know what it is or what it means. A blur of movement. A vague pattern of color. A contrast of darkness. He is aware of novel sensations, to be sure, but they are confusing and hard to interpret. He might be inclined to ignore those sensations altogether if people didn't press him to focus on them, to understand them, to relate them to what he perceives through his other familiar senses.