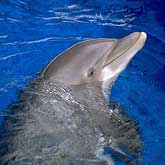 Imagine if your breathing wasn't an automatic response. That might work during the day. But what about when you went to sleep? You wouldn't get a good night's sleep if you had to wake up every few minutes to consciously take a breath. Luckily for humans, and most mammals, breathing is regulated by our autonomic or involuntary nervous system.

This isn't true for dolphins. Dolphins have to consciously control their breathing. An involuntary system would give an animal that may or may not be under water at any given moment, some obvious problems. So, if they must be conscious to breathe, how do dolphins sleep?

A dolphin's brain, like ours, is divided into two hemispheres. But rather than having both hemispheres close down for the night, as we do, dolphins sleep on only one side of their brains at a time. Dolphins are very active for about eight hours a day, with both sides of their brains taking part in their activities. The rest of the time, the two hemispheres take turns sleeping. A dolphin continues swimming slowly near the surface of the water during periods of sleep with one eye wide open and aware of its surroundings. This way of sleeping allows the animal to keep breathing and has the added benefit of keeping that one eye open for predators.