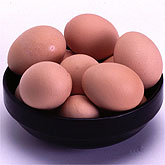 How many chicken eggs have you eaten in your life? If it is any gauge, the per capita consumption of eggs by Americans is over 250 per year. Eggs are not only found on your breakfast plate, but in many of the foods we eat on a daily basis. Yet how well do you know you basic chicken egg anatomy?

Bird eggs are a true wonder of nature. The outer hard shell of an egg is composed of calcium carbonate just like our teeth. Its oval design helps spread weight, say from a sitting mother bird, evenly. The shell keeps bacteria out, but has pores that allow air in. Chicks respire through the shell. Yet it is not so strong that it prevents its inhabitant from emerging when the time is right. Eggs, if properly stored, can last several months. As for the inside of the egg, there's more than the yolk, and albumen, what we call the white of the egg.

Beneath the outside shell lie two membranes: one that is attached to the inside of the shell, and one that surrounds the albumen. These membranes facilitate the passage of air, but not bacteria. A pocket of air is usually found on the larger end of the egg between the membranes. Next are two layers of albumen; a thin outer layer and a thicker inner layer. The albumen is high in protein and is over 80% water. Two twisted strands, called chalazae, hold the yolk in place. Without the chalazae, the yolk and the embryo could be damaged by movement. As it is, the chalazae can take quite a bit of jostling and still keep the egg intact. A yolk membrane surrounds the yolk. And last but not least, we find the yolk, which contains the food for the developing chick. Almost forgotten in this splendid work of construction is the whole purpose of the egg, a tiny germinal disk attached to the yolk which will develop into an embryo. Now you have a new way of looking at your next egg scramble.