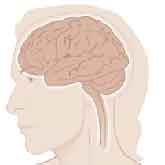 Encephalitis and meningitis are inflammatory diseases of the membranes that surround the brain and spinal cord and are caused by bacterial or viral infections. Viral meningitis is sometimes called aseptic meningitis to indicate it is not the result of bacterial infection and cannot be treated with antibiotics. Symptoms of encephalitis include sudden fever, headache, vomiting, heightened sensitivity to light, stiff neck and back, confusion and impaired judgment, drowsiness, weak muscles, a clumsy and unsteady gait, and irritability. Symptoms that might require emergency treatment include loss of consciousness, seizures, muscle weakness, or sudden severe dementia. Symptoms of meningitis, which may appear suddenly, often include high fever, severe and persistent headache, stiff neck, nausea, and vomiting. Changes in behavior such as confusion, sleepiness, and difficulty waking up may also occur.

In infants, symptoms of meningitis may include irritability or fatigue, lack of appetite, and fever. Viral meningitis usually resolves in 10 days or less, but other types of meningitis can be deadly if not treated promptly. Anyone experiencing symptoms of meningitis or encephalitis should see a doctor immediately. Antiviral medications may be prescribed for herpes encephalitis or other severe viral infections. Antibiotics may be prescribed for bacterial infections. Anticonvulsants are used to prevent or treat seizures. Corticosteroids are used to reduce brain swelling and inflammation. Sedatives may be needed for irritability or restlessness. Over-the-counter medications may be used for fever and headache. Individuals with encephalitis or bacterial meningitis are usually hospitalized for treatment.

The prognosis for encephalitis varies. Some cases are mild, short and relatively benign and patients have full recovery. Other cases are severe, and permanent impairment or death is possible. The acute phase of encephalitis may last for 1 to 2 weeks, with gradual or sudden resolution of fever and neurological symptoms. Neurological symptoms may require many months before full recovery. With early diagnosis and prompt treatment, most patients recover from meningitis. However, in some cases, the disease progresses so rapidly that death occurs during the first 48 hours, despite early treatment.