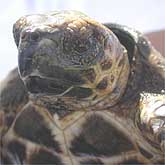 The hawksbill turtle's status has not changed since it was listed as endangered in 1970. It is a solitary nester, and thus, population trends or estimates are difficult to determine. The hawksbill is a small to medium-sized sea turtle. The following characteristics distinguish the hawksbill from other sea turtles: two pairs of prefrontal scales; thick, posteriorly overlapping scutes on the carapace; four pairs of coastal scutes; two claws on each flipper; and a beak-like mouth. The carapace is heart-shaped in very young turtles, and becomes more elongate or subovate with maturity. Its lateral and posterior margins are sharply serrated in all but very old individuals.

Hawksbills utilize different habitats at different stages of their life cycle. Posthatchling hawksbills occupy the pelagic environment, taking shelter in weedlines that accumulate at convergence points. Hawksbills reenter coastal waters when they reach approximately 20-25 cm carapace length. Coral reefs are widely recognized as the resident foraging habitat of juveniles, subadults and adults. This habitat association is undoubtedly related to their diet of sponges, which need solid substrate for attachment. The ledges and caves of the reef provide shelter for resting both during the day and night. Hawksbills are also found around rocky outcrops and high energy shoals, which are also optimum sites for sponge growth. Hawksbills are also known to inhabit mangrove-fringed bays and estuaries, particularly along the eastern shore of continents where coral reefs are absent. In Texas, juvenile hawksbills are associated with stone jetties.

Hawksbills utilize both low- and high-energy nesting beaches in tropical oceans of the world. Both insular and mainland nesting sites are known. Hawksbills will nest on small pocket beaches, and, because of their small body size and great agility, can traverse fringing reefs that limit access by other species. They exhibit a wide tolerance for nesting substrate type. Nests are typically placed under vegetation.The hawksbill occurs in tropical and subtropical seas of the Atlantic, Pacific and Indian Oceans. The species is widely distributed in the Caribbean Sea and western Atlantic Ocean, with representatives of at least some life history stages regularly occurring in southern Florida and the northern Gulf of Mexico (especially Texas); in the Greater and Lesser Antilles; and along the Central American mainland south to Brazil. Within the United States, hawksbills are most common in Puerto Rico and its associated islands, and in the U.S. Virgin Islands.