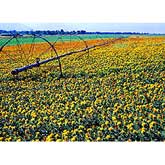 Atmospheric nitrogen is a diatomic molecule of just two nitrogen atoms bonded very strongly to each other. Nitrogen, in compound with other elements, is just a single nitrogen atom bonded very weakly, and thus nitrogen compounds can be very reactive. Reactions occur between materials all the time, but the major consideration in any reaction is the energy differences involved in the reaction process. The difference in energy contained within the reacting materials and the product materials from the reaction is a very important consideration.

For two molecules to react, they must come together and pass through a stage in which their atoms are dislocated from their most stable arrangements. This requires that they take in a certain amount of energy from their surroundings in order to achieve a new conformation from which the product materials can form. This 'activation energy' can be so high that a particular reaction may be discouraged even though the products are far more stable than the reacting materials. In the case of nitrogen, the activation energy for taking the nitrogen molecule apart is high, making the catalytic fixing process necessary.The difference in energy between a nitrogen molecule and two single nitrogen atoms is very high, so that two nitrogen atoms are far more stable as a molecule of nitrogen gas than they are as single atoms in other compounds. This means that any reactions in which single nitrogen atoms can be converted to nitrogen gas will be greatly favored.

The driving force represented by this energy difference can be earth shattering. A case in point is the use of the common fertilizer ammonium nitrate as an explosive. Each ammonium nitrate molecule contains two single nitrogen atoms. This definitely provides the possibility of a reaction in which nitrogen gas will be formed. When provided with a sufficient activation energy, such as aspark or sudden shock (bags of ammonium nitrate are clearly marked 'Do Not Drop'), solid ammonium nitrate will spontaneously rearrange into three gases: nitrogen, water vapour, and oxygen. The bulk transformation is almost instantaneous and is invariably accompanied by a very loud boom sound. Ammonium nitrate is used as the basis of several explosive materials, that are used in the mining industry. Unfortunately, the ready availability of ammonium nitrate as a fertilizer makes it a material of choice for terrorists and anarchists.