What’s So Different About Ferns? 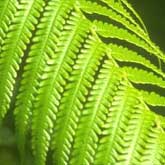 On the underside of a fern leaf there are tiny, round structures called spore capsules. These hold millions of spores, which are released when the environmental conditions are favorable for propagation. After the spores are released, they germinate to form a prothallus, an almost heart shaped green structure. Small roots begin to form on the prothallus along with male and female reproductive structures. They unite to form a new fern. In order for the new fern to be produced the reproductive structures must be in the presence of water; so, ferns prefer to live in a moist environment.

Even though many spores are produced, few actually propagate to become new ferns. Environmental conditions, such as dry weather, may be to blame. Also, some ferns are sterile and do not produce the spores needed for reproduction. Even though ferns do not produce pretty flowers, they have come up with an interesting way to reproduce without them.