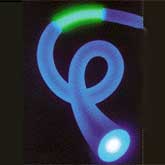 The sun is shining; it's a brilliant day. The springboard flexes powerfully under your feet as you launch into a graceful arc through the air and into the crystal clear water below. Arms extended, you let the momentum of your dive take you back toward the surface. As you near the surface, the interface between the water and the air, you notice something interesting. You can't see out of the water! Instead, you see the inside of the pool reflected clearly in a shimmering, silvery mirror. What you have just seen is the principle that makes fiber optics both practical and functional. The phenomenon is known as 'total internal reflection', or TIR.

The principle of TIR has been known or at least suspected since the 1840's, when David Colloden and Jacques Babinet first designed and built water fountain displays in which the streams of water also guided or carried light to enhance the display. As the theory and understanding of the behaviour of light improved, the ability to utilize the principle of TIR also improved. In essence, an interface between two materials, such as between water and air or between glass and air, acts as a reflective surface. Glass that has been drawn into long, thin, and highly flexible fibers, and is then coated with a non-absorbing material provides an interface that reflects essentially all light back into the fiber itself, allowing none to escape through the periphery of the glass fiber. The reflected light beam bounces back and forth from interface to interface along the length of the fiber, until it exits the end of the fiber as an exact image of the light that first entered the fiber.

As a communications or message carrier, optical fibers alone are not enough. Ordinary light, and even polarized light, contain a vast range of wavelengths, all in different phases of their vibratory cycles. The laser is the final key that makes fiber optics feasible for communication purposes. Since the light waves from a laser are all within a very narrow range of wavelengths and are all in the same phase of their vibratory cycles, the signal, and the message it carries, does not get all twisted about and mashed into an incomprehensible blur by the countless reflections experienced as it passes from one end of the fiber to the other.