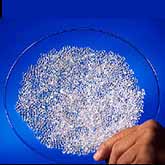 Ultra-absorbent diapers, the kind that will hold massive amounts of liquids, have been used for years, without a second thought given to the materials within them. Let's face it; those materials aren't very interesting: a bit of thin plastic sheet, some cellulose fiber, and some weird powder that combines with humongous amounts of liquid that even a pediatric urologist wouldn't look at twice. What good is it? But if one considers that 99.9% or more of that liquid is just plain water, and that it takes a lot of energy (as heat) to drive that water out again, maybe there is another use for such materials after all. Water molecules are highly polar in nature; they try to stick together like so many little magnets. It therefore takes a great deal of energy to separate them into vapor. These two observed properties - a material that absorbs a great deal of water, and the high boiling point of water - can work together to hold back the most common destructive force known: fire.

That ultra-absorbent powder material is a polymer, or type of plastic, known as polyacrylate. These polymers are derived from acrylic acid, or 2-propenoic acid, and they comprise a very large group of useful plastics, including Plexiglas, Crazy Glue, and all of the other various acrylics' that one encounters every day. In the form of a powder, certain polyacrylates absorb and trap large amounts of water - up to 1000X their weight - and form a sort of thin paste or gel. This slimy fluid can then be sprayed over things to protect them from fire. Fire produces a great deal of heat energy. Adjacent materials absorb this energy and eventually get hot enough to begin burning on their own. Thus the fire spreads. However, when the water-saturated gel is encountered, the heat energy from the fire is redirected and is consumed by first having to drive out all of the entrapped water as steam. This prevents the heat from building up to the point of combustion in the surrounding materials.

Instead, for as long as there is liquid water present in the gel, the temperature of the coated object can not exceed the boiling point of water, which is far below the combustion temperature. Only when all of the water has been driven out can the temperature of the wood and other materials begin to rise again. The delay caused by this requirement to convert liquid water to steam can be sufficient to allow the fire to burn its way past a building or even to burn out, and the gel-coated building survives the blaze almost totally unscathed. All due to 'diaper technology'.