GM: Not For General Motors Anymore 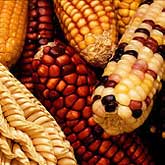 Genetically Modified plants have been given genes from other plants or even other species, that make them better able to resist diseases and pests, or more nutritious, or more productive. The list of qualities that can be provided by genetic modification is long and getting longer. Rice has been given a gene to make beta-carotene so children who eat mostly rice will get enough vitamin A. Cotton has been given a gene that makes a bacterial toxin that kills boll weevils, an insect pest that ruins cotton crops.

How is genetic modification done? Thanks to biotechnology, genes from other plants or other species can be inserted directly into the nuclei of plant cells. Cells from the plant you want to modify are grown in a petri dish, the new genes are put in the growth medium and chemically or mechanically prodded to enter the cells. Then the cells are cultured until they form a new plant, just like the original except that it now contains a foreign gene. This is a much faster and more versatile way of adding new characteristics to a plant than the old method of selective breeding.

But GM crops are very controversial. Many people think they promise better nutrition, cheaper food, and less pesticide use. But many other people fear that GM plants may escape from farmlands into wild areas, or that some people may turn out to be allergic to the 'foreign' substances they contain, or that the companies that produce GM seeds will have too much power.