New Evidence Points to a Gamma-Ray Burst... In Our Own Backyard 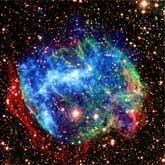 Only 35,000 light years away lies W49B, the supernova remnant left over from the cataclysmic burst. New evidence pointing to a gamma ray burst origin for this remnant was discovered by X-ray data from the Chandra X-ray Observatory, combined with infrared observations from the Palomar 200-inch telescope in southern California. The discovery is exciting for two reasons. It may be the first time a supernova remnant from a gamma-ray burst has been found so close to Earth. It also appears to be tied to a special type of black hole called a 'collapsar,' which was first theorized by scientists more than a decade ago. 'The nearest known gamma-ray burst to Earth is several million light years away -- most are billions of light years distant -- so the detection of the remnant of one in our own galaxy would be a major breakthrough,' said William Reach of the California Institute of Technology. W49B is barrel-shaped and ringed by bright, infrared 'hoops.'

But one of its most intriguing features is the intense X-radiation produced by concentrations of iron and nickel ions along the axis of the barrel. This makes it 'a prime candidate for being the remnant of a gamma-ray burst involving a black hole collapsar,' according to Jonathan Keohane of NASA's Jet Propulsion Laboratory in Pasadena, Calif. In a traditional supernova, only the outer parts of the star are flung outward during the explosion. But in the collapsar model, iron and nickel from the center of the exploding star is ejected outward along the jets of hot gas. W49B appears to fit the collapsar pattern. For more than a decade, astronomers have suspected that gamma-ray bursts are produced when the core of a massive star collapses, forming a black hole collapsar. A disk of superhot, magnetized gas spins rapidly around the black hole, which pulls in most of the gas. But some is hurled outward in opposite directions at nearly the speed of light.

An observer in the path of one of these jets would be blinded by a gamma-ray burst packing as much power as ten quadrillion suns. Until the discovery of W49B, there was a problem with the collapsar theory. Massive stars -- stars large enough to form collapsars -- are usually formed in a dense cloud of dust. But the afterglow of gamma-ray bursts seem to point to the explosion taking place in a low-density gas. Keohane and his colleagues believe barrel-shaped W49B nebula may help solve that problem. The infrared image reveals four rings of warm gas that were most likely flung away from the star a few hundred thousand years before the explosion. A hot wind blowing from the star pushed these rings even further outward. By the time of its collapse, the star had carved out a low-density cavity immediately around itself. 'This star appears to have exploded inside a bubble it had created,' Keohane of said. 'In a sense, it dug its own grave.'