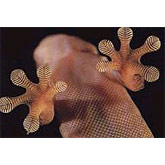 Geckos are small, insect-eating, noisy lizards that live in many parts of the world. While geckos have become common pets, the way that they manage to stick to smooth ceilings has remained a mystery. Scientists initially expected to find that geckos have tiny suction cups on their feet, or a sticky glue secreted by their toes. Both explanations were ruled out after careful study.

So how do geckos go anywhere they want? The answer is van der Waals forces! Van der Waals forces are caused by charge separation. When an electron on a molecule or an atom moves slightly away from its equilibrium position, it leaves a tiny region with a net positive charge, and another region with a net negative charge. These charged areas move electrons on nearby atoms or molecules to create an opposing charge separation. When this happens, the molecules stick together (positive attracts negative, and vice versa). As you might have guessed, van der Waals forces are dynamic; the regions of charge are always shifting.

When professor Robert Full and his team looked closely at a gecko's toes, they found about two million densely packed fine hairs called setae. The end of each seta is subdivided into hundreds to thousands of structures called spatulae. The combined adhesive force of all of the tiny hairs is ten times greater than the weight of the gecko. If human hands had the same setae layer, each would be able to support 90 lbs through adhesion. Multiply that by four, and a 360-pound body could stick to the ceiling! Geckos walk by rolling these hairs, or spatulae, onto the surface, and then peeling them off again just like tape. Scientists are now developing a new type of tape, based on the gecko's sticking ability.