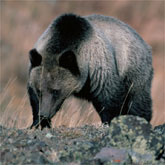 A symbol of America's wildlands, the grizzly or brown bear is one of the largest North American land mammals. The grizzly bear's historic range covered much of North America from the mid-plains westward to California and from central Mexico north throughout Alaska and Canada. Today, the grizzly bear is found in only about 2 percent of its original range in the lower 48 states. Grizzly bears need a very large home range, encompassing diverse forests interspersed with moist meadows and grasslands in or near mountains. In the spring, bears usually range at lower elevations and go to higher altitudes for winter hibernation. Larger than the black bear, male grizzly bears stand about 7 feet tall and weigh from 300 to 600 pounds. Females are smaller, usually weighing between 200 and 400 pounds. Although a standing grizzly is commonly perceived to be a threatening pose, bears stand when they are simply curious or surveying their surroundings. Otherwise they generally remain on all fours.

Unlike the black bear, the grizzly bear has a rather concave face, high-humped shoulders, and long, curved claws. The grizzly's thick fur, which varies from light brown to nearly black, sometimes looks frosty-looking, hence the name 'grizzly,' or the less common 'silvertip.' The grizzly has shorter, rounder ears than the black bear. Except for mating and caring for the young, grizzly bears primarily lead solitary lives, spending most of their time foraging, or looking for food. The grizzly is North America's largest omnivore, meaning it eats both plants and other animals. About 80 to 90 percent of the grizzly's food is green vegetation, wild fruits and berries, nuts, and bulbs or roots of certain plants. Grizzlies also eat a great deal of insects, sometimes tearing rotten logs apart and turning over heavy stones in search of the insects themselves or their larvae.

Most of the meat in the grizzly's diet comes from animal carcasses, or carrion, of big game animals, although it will sometimes prey on elk or moose calves or smaller mammals. For grizzlies along the west coast of Canada and in Alaska, salmon is an important food source. The grizzly bear must eat enough to store huge amounts of fat needed to sustain it through its long winter sleep. The grizzly's ability to eat large quantities of rich food and store fat without suffering from heart disease or cholesterol problems is of great interest to medical scientists. If scientists can determine how grizzlies accomplish this, that information may be useful in preventing human heart disease. At the top of the food chain, adult grizzly bears have little to fear from other wild animals.