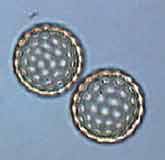 If spring's flying pollen is making you sneeze, you are not alone. Some 40 to 50 million people in the United States complain of respiratory allergies, and experts estimate that three to four million workdays are lost annually to them. To blame for all this misery is an overreacting immune system. The allergic response begins when T cells in the blood trigger the production of IgE antibodies. IgE in the blood and lymph carries the allergen (the protein that causes an allergic response) to mast cells in the skin and airways. The mast cells release histamine and other inflammatory chemicals.

Mast cells won't react to an allergen unless previously sensitized. That means they already have an IgE antibody specific to a particular allergen bound to them. For example, most people can breathe spring tree pollen all day and have no reaction. Only allergic people make IgE antibodies against the pollen. These molecules bind to mast cells in the nose and air passages. They remain there after a first exposure. When tree pollen comes along again, the runny nose and itchy eyes of hay fever set in.