Hollywood To The Rescue 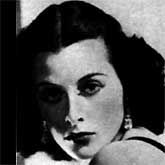 Sixty years ago, World War II was driving many advances in the sciences; a surprising number of these developments have evolved to impact our lives today. At the beginning of the war, scientists and engineers were finding new applications for radio waves. For example, they used the discovery that waves would reflect off objects to create Radar, and they used narrow beams of radio energy to provide a path that aircraft could steer along towards an enemy target.

One problem with radio waves was that as soon as the enemy knew what frequency you were using, it was very simple for them to transmit a very strong signal at the same frequency. This would drown out your transmission. This is called 'blocking'; it is the same as having a conversation with somebody near you shouting very loudly! The Navy was having this problem with their new torpedoes. They were designed to be steered by radio waves, but the enemy discovered that they could easily block these steering transmissions so the torpedoes would miss.

A pair of inventors who knew about music, and the then popular 'player piano' struck upon a solution. If, while the torpedo was on the way to its target, they could simultaneously change the frequencies that the transmitter and receiver were using, and they changed the frequencies often enough, it would be impossible for the signal to be jammed. Player pianos used rolls of paper that were slowly rotated, and perforations across their width were used to signal which notes to play. The inventors suggested using this same paper roll in both the torpedo and transmitter to control which radio frequencies to use and the order in which to use them. Today this technique is called 'Spread Spectrum' and is the basic technology behind modern cellular telephony. A patent was filed, but it lapsed before the significance of the invention was fully realized. The inventors' names were George Antheil and the famous actress, Hedy Lamarr.