How a Horse Can Save Your Life? 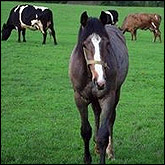 Most people who have been vaccinated with the smallpox vaccine never really question what exactly was injected into their body. If they did, they might be surprised, and maybe thank a horse or two. You may not know it, but the smallpox vaccine is a solution containing the living cowpox virus, not the smallpox virus. The cowpox virus is a strain of the smallpox virus, but instead of giving its victim a deadly disease, the victim gets a mild case of pox, or pustules, that appear on the hands and wrists. Other symptoms of cowpox include those similar to the flu such as aches, pains, shivers, and vomiting.

Since cowpox is a strain of smallpox, the antibodies produced during infection with cowpox are able to fight off the smallpox virus. During the cowpox infection, your body learns how to fight smallpox. As you may have guessed, the cowpox virus comes from cows. Cows get the virus, it shows up as pustules on the cows' udders, the people who milk the cows get the virus, and then develop cowpox. All of this was noticed by Dr. Edward Jenner in the late 1700s when smallpox was responsible for 20% of all deaths in Europe. He noticed that dairymaids were immune to the disease, and suspected that cowpox had something to do with it. In 1796, he injected the cowpox virus into an eight year old boy. The boy developed cowpox, and when he recovered, Jenner infected him with the smallpox virus. The boy did not get infected, and the first vaccine was invented.

So what do horses have to do with all of this? At the time, horses were subject to a disease that caused inflammation and swelling in the heel called the grease. When a farm worker applied dressings to a horse infected with the grease, he went right back to milking the cows after he was finished. The virus that caused the grease in the horse infected the cow, and the cow developed cowpox, which spread throughout the dairy farms. So how do you prevent smallpox from wiping out a population? More horse power!