How Did Dogs Evolve? 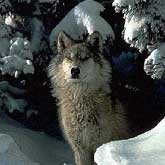 While the status of the dog as humankind's best and oldest friend remains unchallenged, debate rages about just how far back the friendship goes. Fossils of domesticated dogs appear in the remains of human settlements between 10,000 and 14,000 years old, but measurements of mutations in the genes of mitochondria (the 'energy factories' of cells) suggest a much earlier transition, perhaps 100,000 to 135,000 years past.

All modern carnivores share a common ancestor, Leptocyon, a genus of meat-eating mammal common in the fossil record of about 12 million years ago. Another ten million years of change established the foundation stocks of all living genera, including cats, raccoons, and bears. Today's largest group, Canis, comprises hyenas, foxes, and jackals--as well as wolves, the progenitors of domestic dogs. Natural selection explains the domestication of wolves. Efficient scavengers, wolves were quick to exploit a plentiful new food source--the human garbage dump. The advanced communication and cooperative skills of these pack-hunting animals shifted readily to social interaction with humans. After domestication, artificial selection or selective breeding produced the 400 breeds of dogs we see today. Early peoples chose breeding dogs for their size or skills in hunting and sentry duty. Later, appearance and companionable behavior became favored traits.

Three forces drive evolution whether through natural or human-controlled. They are variability, selection, and reproduction. With a few exceptions (for example, bacteria and identical twins), no two organisms are exactly alike. Each individual carries a unique set of genes (DNA). Occasional mutations (random changes in DNA) increase variability among members of a group. Because of the variable traits they possess, some individuals are more likely to survive in a particular environment than others. Characteristics that increase chances of survival are adaptations. Well-adapted organisms survive. That's selection. Through reproduction, survivors pass their genes to their offspring. The progeny often inherit the same genetically controlled adaptations that promoted their parents' survival.