Will That Be One Hump or Two? 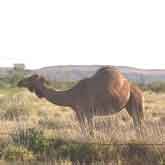 Camels are highly adaptive to their environments. Often called the ships of the desert, they have been domesticated by humans for thousands of years, as beasts of burden and as transportation. What gives these unique mammals such an advantage in some of the most inhospitable climates on Earth? Many point to their humps where they store all that water.

The one-humped camel is the dromedary camel, while the two-hump camel is called the Bactrian camel. And no, they DO NOT store water in those humps. The humps are full of fat which is used by the camel when food is in short supply. In fact, a camel's hump will sag and droop when fat has been metabolized, but it swells back up after several good meals. Water is scarce in the arid regions where camels live, so camels have adapted to go without water for almost 3 weeks. When they do drink they can consume up to 30 gallons in less than 15 minutes, an incredible feat.

The reason why they can go without has to do with some amazing features of camels. First, their body temperature, unlike most animals, is variable, so that they can set their internal thermostats to take advantage of the temperature during the day and night. They also have extremely effective kidneys that actually recycle some of the water that they drink. Also, those humps do help them conserve water by pulling heat away from vital organs. Finally, after drinking, they retain a large volume of water in their stomachs. So although those humps don't hold water like a reservoir, camels do in fact hoard water in their bodies.