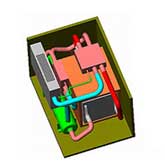 Hydrogen is the simplest element; an atom consists of only one proton and one electron. It is also the most plentiful element in the universe. Despite its simplicity and abundance, hydrogen doesn't occur naturally as a gas on the Earth--it is always combined with other elements. Water, for example, is a combination of hydrogen and oxygen (H2O) Hydrogen is also found in many organic compounds, notably the 'hydrocarbons' that make up many of our fuels, such as gasoline, natural gas, methanol, and propane.

Hydrogen is high in energy, yet an engine that burns pure hydrogen produces almost no pollution. NASA has used liquid hydrogen since the 1970s to propel the space shuttle and other rockets into orbit. Hydrogen fuel cells power the shuttle's electrical systems, producing a clean byproduct--pure water, which the crew drinks. You can think of a fuel cell as a battery that is constantly replenished by adding fuel to it--it never loses its charge. Fuel cells are a promising technology for use as a source of heat and electricity for buildings, and as an electrical power source for electric vehicles. Although these applications would ideally run off pure hydrogen, in the near term they are likely to be fueled with natural gas, methanol, or even gasoline. Reforming these fuels to create hydrogen will allow the use of much of our current energy infrastructure--gas stations, natural gas pipelines, etc.--while fuel cells are phased in.

Some experts think that hydrogen will form the basic energy infrastructure that will power future societies, replacing today's natural gas, oil, coal, and electricity infrastructures. They see a new hydrogen economy to replace our current energy economies, although that vision probably won't happen until far in the future.