Is Your Immune System Educated? 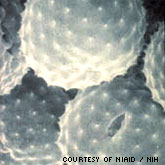 When spring comes, do you hide indoors because your eyes and nose water, and you can't stop sneezing? Do cats or dogs cause you the same symptoms? Have you wondered why you have allergies and other people don't? Perhaps your immune system missed out on an education when you were young!

An allergy is an immune overreaction to an ordinarily harmless substance. When the body encounters an allergen, it reacts by producing immunoglobulin E (IgE). IgE is a protein manufactured by specialized immune cells that help to destroy invading organisms that cause disease. When IgE bonds to mast cells, the body releases histamine, which causes allergy symptoms such as watery eyes, itching, sneezing, swelling, or a runny nose. Hence, antihistamines are used to relieve allergy symptoms. It has long been known that people who grow up in the country are less likely to have allergies or asthma than people who grow up in suburban areas. European scientists have determined that the difference comes from country folk's greater exposure to endotoxin, the outer membrane of common bacteria. People who grow up on farms are exposed to twice as much as their urban counterparts. This heavy endotoxin exposure trains the immune system to distinguish between real health threats such as bacteria, and harmless biological entities such as pollen.

If that weren't enough, researchers found that children exposed to two or more dogs or cats during their first year of life were 66 to 77 percent less likely to have allergies to common allergens, compared to children exposed to only one or no pets during their first year. Other studies have shown that pet exposure at an early age also protects against asthma. So, perhaps your immune system wasn't properly educated. For those of you out there with tiny children: get some pets!