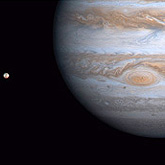 With its numerous moons and several rings, the Jupiter system is a 'mini-solar system.' Jupiter is the most massive planet in our solar system, and in composition it resembles a small star. In fact, if Jupiter had been between fifty and one hundred times more massive, it would have become a star rather than a planet.

At first glance, Jupiter appears striped. These stripes are dark belts and light zones created by strong east-west winds in Jupiter's upper atmosphere. Within these belts and zones are storm systems that have raged for years. The southern hemisphere's Great Red Spot has existed for at least 100 years, and perhaps longer, as Galileo reported seeing a similar feature nearly 400 years ago. Three Earths could fit across the Great Red Spot. Jupiter's core is probably not solid but a dense, hot liquid with a consistency like thick soup. The pressure inside Jupiter may be 30 million times greater than the pressure at Earth's surface.

As Jupiter rotates, a giant magnetic field is generated in its electrically conducting liquid interior. Trapped within Jupiter's magnetosphere - the area in which magnetic field lines encircle the planet from pole to pole - are enough charged particles to make the inner portions of Jupiter's magnetosphere the most deadly radiation environment of any of the planets, both for humans and for electronic equipment. The 'tail' of Jupiter's magnetic field - that portion stretched behind the planet as the solar wind rushes past - has been detected as far as Saturn's orbit. Jupiter's rings and moons are embedded in an intense radiation belt of electrons and ions trapped in the magnetic field. The Jovian magnetosphere, which comprises these particles and fields, balloons one to three extending more than one billion kilometers behind Jupiter - as far as Saturn's orbit.