It's Dusty Out There 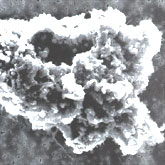 There is no lower limit to the size of the solid particles that move around the Sun. Small asteroids grade downward into large meteoroids and then into smaller pebbles and so on down to the tiniest particles of dust. The most numerous particles are the smallest ones. A particle larger than a millimeter (about one twenty-fifth of an inch) in diameter is a relative rarity in space, but even smaller particles exist by the uncountable billions. There are enough of them to reflect sunlight in a faint glow, called the zodiacal light. Unlike planets and other large objects, dust particles are not permanent residents of the solar system. They spiral slowly inward toward the Sun. Over a million years or so, a typical particle will fall into the Sun, so that the current dust population must consist of fairly new arrivals, presumably shed from comets.

Because interplanetary dust particles may be actual samples of comets, strenuous efforts have been made to collect them. Many efforts failed because of the rarity of the particles and the contamination of collecting devices by terrestrial dust. Recently, however, extraterrestrial dust particles have been successfully trapped with collectors mounted on high-flying aircraft. The yield has been small so far: only about a hundred particles a few thousandths of a millimeter across. But recently developed instruments are so sensitive that even these tiny objects can be usefully studied. They are definitely extraterrestrial, for their chemical composition is like that of common meteorites (and not like that of the Earth), but they are fluffy, fragile objects, each particle a mosaic of millions of tiny crystals.

As we look ahead to the reappearance of Halley's Comet, we are continuing to collect and study the dust that may have been shed by comets in the past. Perhaps when Halley does appear, we may be able to do more than just look at it. We may be able to collect and analyze the very dust that it sheds as some of those tiny fragments drift down to our planet.