When This Lake 'Burps,' Better Watch Out! 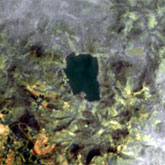 Nearly twenty years ago, two lakes in Cameroon, a country in Africa, 'burped,' killing hundreds of people. What makes a lake burp? Lake Nyos and Lake Monoun are unusual lakes. They each formed in the crater of a volcano that is dormant but not extinct. Under the lake, the magma, molten lava deep in the earth, gives off gases, including carbon dioxide (the gas that makes soda fizzy). The gases seep into the groundwater, and from there into the lake. Most of the time, the carbon dioxide stays dissolved in the cold water at the bottom of the lake, trapped there by layers of warmer water that lie near the surface. In large, deep lakes, these layers don't mix.

But if something happens to disturb the layers (like shaking the soda can!), the dissolved gas can come rushing to the surface and form a deadly cloud that spreads around the shores of the lake. A landslide, an earthquake, or even a big storm can set it off.

Carbon dioxide is a normal part of the air we breathe, but only a tiny part (0.3%). A cloud of carbon dioxide gas contains no oxygen, so we would suffocate if we breathed it. Carbon dioxide is heavier than air, so when the lakes 'burped,' the cloud stayed close to the ground, killing the people and animals near the lake shore. Last year, scientists stuck a vent pipe down to the bottom of both lakes. They hope this will let the trapped gas escape slowly and not build up to dangerous levels.