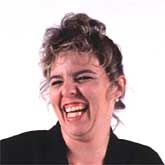 There's an oft-repeated scientific definition of laughter as one or more forcibly voiced, acoustically symmetric, vowel-like notes (75 ms duration) separated by regular intervals (210-218 ms), and a decrescendo. That's pretty precise. Humor, on the other hand, is much harder to define. You can't really understand a complex cognitive construct like humor by knowing what part of the brain handles it, but it's a start. Right-brain stroke patients can lose their sense of humor even if their other cognitive abilities, including language, remain intact. So the right hemisphere is more important than the left for getting the point of a joke. A recent brain-imaging study has narrowed it down further, and identified a precise locus of humor appreciation in the right frontal lobe.

The frontal lobe of the brain is the locus of working memory, an on-line information-processing faculty that helps you hold several pieces of information in your mind while you solve a problem. In the case of humor appreciation, the problem to be solved is getting the joke, and in order to do that it's often necessary to reconcile a punch line with what you were set up to expect. (A Groucho Marx example: Time flies like an arrow. Fruit flies like a banana.) Most attempts to define humor refer to the notion of incongruity, or putting two things together in an unexpected way. Those two things can be expectations and a punch line, for example, or someone's behavior and the setting in which it occurs. Part of the right frontal lobe seems to be doing the job of holding these different things in mind at the same time, so that you can recognize the incongruity that results in laugh.

Of course, nobody has the right to tell you what the definition of humor is, any more than a biologist can tell a cat what a purr means. But it can be fun to see how the definitions proposed by psychologists hold up to the data provided by actual jokes. Here is another classic from Groucho Marx: Outside of a dog, a book is man's best friend. Inside of a dog, it's too dark to read.