Liquid Glass Is All Wet 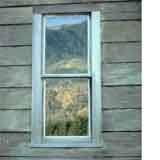 As a liquid changes to a solid, its molecules go from a state of turmoil and chaos to a state of order. As these molecules slow down to form a solid, they arrange themselves into a crystalline pattern. But glass is a unique substance, for unlike all other solids, its molecules remain disordered. This has led some to speculate that glass is really a liquid that never quite settled into being a solid. Their evidence comes from the condition of very old glass panes, which may be thicker at the top or bottom, or cloudy, or have swirls. They theorize that these variations are the result of very slow movement of the not-quite-solid substance. But is this correct?

In the process of changing from a liquid to a solid, a substance becomes more viscous, which means it becomes thicker. Think of the difference between pouring water and pouring maple syrup. As glass cools, it becomes much more viscous than other liquids, to the point where crystals cannot form. Nonetheless as it cools further, it becomes hard and inflexible like any other solid.

So what about the evidence of those old window panes? Actually glass-making was less sophisticated centuries ago. It is much more likely that the cause of the misshapen glass was the glass-making process rather than a tendency for glass to keep moving once it is cooled. Next time the neighborhood kids hit a baseball through your front window and it shatters, keep that in mind.