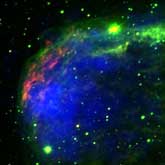 Massive stars lead short, yet spectacular lives. And, they usually do not go quietly, instead often blowing themselves apart in supernova explosions. Astronomers are curious about the details of the final steps before these violent endings. A new image gives astronomers a look at this critical period of one massive star's life and imminent death. NASA's Chandra X-ray Observatory data (blue) and optical observations (green and red) reveal the region around a doomed massive star called HD 192163. This star is surrounded by a giant gaseous shell, known as the Crescent Nebula, which has been created by powerful winds blowing from HD 192163.

How did the star get to this stage? After only 4.5 million years (one-thousandth the age of the Sun), HD 192163 began its headlong rush toward a supernova catastrophe. First, it expanded enormously to become a red giant and ejected its outer layers at about 20,000 miles per hour. Two hundred thousand years later -- a blink of the eye in the life of a normal star -- the intense radiation from the exposed hot, inner layer of the star began pushing gas away at speeds in excess of 3 million miles per hour!

When this high-speed 'stellar wind' rammed into the slower red giant wind, a dense shell was formed. In the image, a portion of the shell is shown in red. The force of the collision created two shock waves: one that moved outward from the dense shell to create the green filamentary structure, and one that moved inward to produce a bubble of million-degree Celsius X-ray-emitting gas (blue). The brightest X-ray emission is near the densest part of the compressed shell of gas, indicating that the hot gas is evaporating matter from the shell. HD 192163 will likely explode as a supernova in about 100,000 years. This image enables astronomers to determine the mass, energy, and composition of the gaseous shell around this pre-supernova star. An understanding of such environments provides important data for interpreting observations of supernovas and their remnants.