Luck Of The Irish? 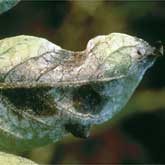 In the 1800s many Irish were poor tenant farmers who farmed mainly for the landowner and relied on small plots for their own food. Because high yields of potatoes could be obtained from these small plots, this was their main source of food. In other European countries, small farmers grew other high yielding crops like parsnips and cabbage and were not as dependent on a single crop as were the Irish. In 1843, late blight, a potato disease that was taken to Europe from South America along with the potato, attacked potato fields throughout Europe and outbreaks of the disease were repeated in 1844 and 1845.

Not only did the blighted potato vines produce fewer potatoes, but those that were harvested rotted in storage. As a result of their dependence on the potato, a million Irish died from starvation and related health problems, and another million or more left Ireland for other countries, many coming to the America.

Late blight is caused by a 'water mold' fungus (Oomycete) and is favored by cool, wet weather. The fungus can carry over from one season to the next as resting spores in the soil, but more commonly as fungus threads (mycelium) in diseased potato tubers. The disease commonly starts in cull piles where infected potatoes are dumped or in diseased potatoes left in the field after harvest. Late blight still is a problem at times in various places, but outbreaks of the disease are not the threat they once were. This is because effective fungicides are available, and agriculture is now highly diversified with many kinds of crops being grown.