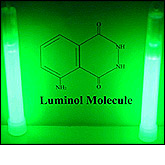 What does trick-or-treating and crime scene investigation have in common? Hopefully, they don't have much in common, unless the trick-or-treater is wearing a safety glow stick. Glow sticks contain luminol, a chemical substance used at crime scenes which glows when mixed with blood. When a crime is committed that involves blood spilling, luminol can detect the blood even after cleaning, and even after a few years!

So, how does luminol tell all? It is the main chemical (C8H7O3N3) in a reaction that produces light. This powdery substance, made of carbon, hydrogen, oxygen, and nitrogen, is mixed with a liquid that contains hydrogen peroxide and a hydroxide, plus some other chemicals. Investigators put this liquid into a spray bottle, and spray the area where they are looking for blood. In order to produce a strong glow, oxidation needs to occur. This is achieved by adding a metal ion to the liquid. In blood detection, the metal ion that starts oxidation is iron, which is present in hemoglobin.

So, why does this produce light? The starting materials have more energy than the resulting materials. Normally, when a chemical reaction results in the production of energy, the molecules release the energy by vibrating, rotating, or generally moving around; in other words the mixture heats up. For the oxidation of luminol, there is no pathway to release energy through motion. That means that energy has to be released another way, luminol does this by emitting a piece of light called a photon. When the chemicals have been consumed and all of the excited luminol molecules have relaxed, the mixture stops glowing. So, next time you're trick-or-treating, or investigating a homicide, stop and reflect on the wonders of luminol.